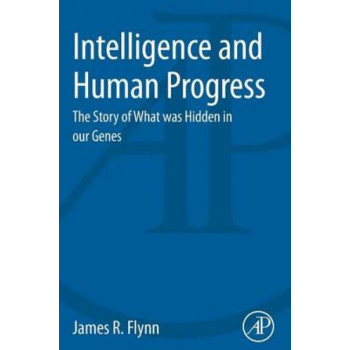 Intelligence and Human Progress: The Story of What Was Hidden in Our Genes

Written by James R. Flynn of the "Flynn effect" (the sustained and substantial increase in intelligence test scores across the world over many decades), Intelligence and Human Progress examines genes and human achievement in all aspects, including what genes allow and forbid in terms of personal life history, the cognitive progress of humanity, the moral progress of humanity, and the cross-fertilization of the two. This book presents a new method for weighing family influences versus genes in the cognitive abilities of individuals, and counters the arguments of those who dismiss gains in IQ as true cognitive gains. It ranges over topics including: how family can handicap those taking the SAT; new IQ thresholds for occupations that show elite occupations are within reach of the average American; what Pol Pot did to the genetic potential of Cambodia; why dysgenics (the deterioration of human genes over the generations) is important, but no menace for the foreseeable future; and what might derail human intellectual progress. Researchers in developmental and cognitive psychology, educators, and professionals involved in intelligence testing or psychometrics will benefit from the perspectives offered here. But beyond that, anyone interested in the potential of the human mind will be engaged and challenged by one of the most important contemporary thinkers on the subject.