Step through the doors of the University Book Shop into one of New Zealand’s best-loved independent bookshops.
The Otago University Students’ Association owns the Bookshop. While it meets the specialised needs of students and academics, it is primarily a bookshop for everyone. 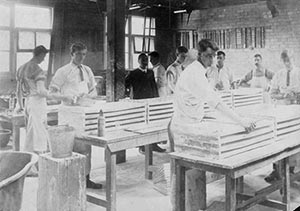 The shop building was built in 1910 by confectionery company Romison and Co. and produced boiled sweets and chocolate tablets. The University Book Shop has occupied the building since 1962; a hydraulic hoist – once employed to shift trays of sweets – now moves trolleys of books between floors!

The distinctive triple-brick building, with its double pitched roofline, was also the home to the Landfall offices, New Zealand’s first and longest running literary journal, now housed out of Otago University Press. Its founding editor, Charles Brasch, as well as being one of the poets who helped forge New Zealand’s own distinct voice, was a wonderful supporter of early luminaries as James K Baxter, Ruth Dallas and Janet Frame who used to frequent the shop.
The very desk at which Brasch is purported to have edited Landfall now takes pride of place downstairs in the shop; its beautiful turned legs are much admired. 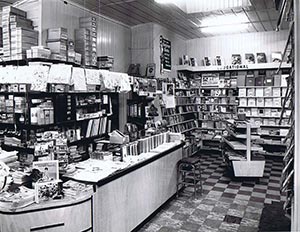 During the 1960s the Landfall office was located in the building, in what is now the current staff room. This is where Ruth Dallas typed up Landfall for Charles Brasch, then-editor of the magazine. Charles Brasch left his mark – a still visible signature is written in chalk on the fuse box!

The first floor landing of the shop features portraits of writers by the painter and printmaker Eion Stevens, who had his studio in the bookshop building. Katherine Mansfield, Virginia Woolf, James Joyce, Margaret Drabble, Dickens, W.H Auden, Graham Green and Evelyn Waugh are the subjects of these stylish, monochrome images.