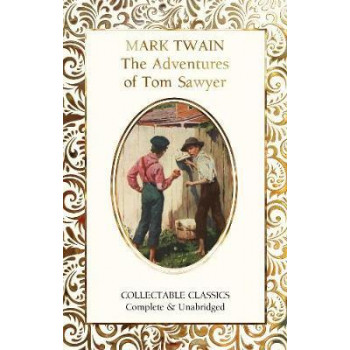 A stunning new edition with deluxe cover treatments, ribbon markers, luxury endpapers and gilded edges. The unabridged text is accompanied by a Glossary of Victorian and Literary terms produced for the modern reader. Mischievous and smart, Tom Sawyer, is one of American literature's most beloved literary characters. Originally published in 1876, Mark Twain's The Adventures of Tom Sawyer chronicles the exploits of Tom and his friends including Twain's other lovable rogue, Huckleberry Finn as they witness a murder, play at being pirates along the Mississippi River, hunt for treasure and even attend their own funeral. Inspired by Twain's own boyhood, this spirited classic is full of hi-jinks, not to mention a good deal of suspense. The FLAME TREE COLLECTABLE CLASSICS are chosen to create a delightful and timeless home library. Hardback Deluxe edition, foiled and embossed, with gilded edges.