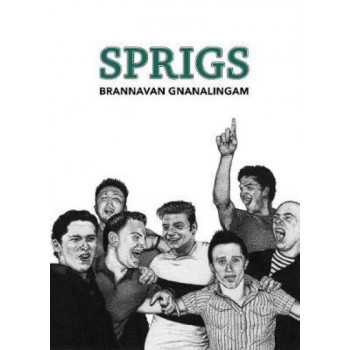 It is Saturday afternoon and two boys' schools are locked in battle for college rugby supremacy. Priya - a fifteen year old who barely belongs - watches from the sidelines. Then it is Saturday night and the team is partying, Priya's friends have evaporated and she isn't sure what to do. In the weeks after 'the incident' life seems to go on. But when whispers turn to confrontation, the institutions of wealth and privilege circle the wagons. Sprigs is the latest novel from Brannavan Gnanalingam. His previous novel Sodden Downstream (Lawrence and Gibson; 2017) was short-listed for the Acorn Foundation prize for best fiction of the year. He is also the author of A Briefcase, Two Pies and a Penthouse and three other books published by Lawrence and Gibson.