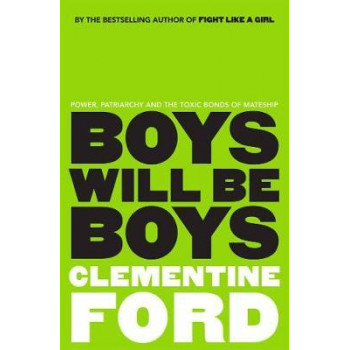 Boys Will be Boys: Power, Patriarchy and the Toxic Bonds of Mateship

'Everyone's afraid that their daughters might be hurt. No one seems to be scared that their sons might be the ones to do it ... This book ... is the culmination of many years of writing about power, abuse, privilege, male entitlement and rape culture. After all that, here's what I've learned: we should be f*cking terrified.' Clementine Ford, from the introduction Fearless feminist heroine Clementine Ford is a beacon of hope and inspiration to hundreds of thousands of Australian women and girls. Her incendiary first book, Fight Like A Girl, is taking the world by storm, galvanising women to demand and fight for real equality and not merely the illusion of it. Now Boys Will Be Boys examines what needs to change for that equality to become a reality. It answers the question most asked of Clementine: 'How do I raise my son to respect women and give them equal space in the world? How do I make sure he's a supporter and not a perpetrator?' All boys start out innocent and tender, but by the time they are adolescents many of them will subscribe to a view of masculinity that is openly contemptuous of women and girls. Our world conditions boys into entitlement, privilege and power at the expense not just of girls' humanity but also of their own. Ford demolishes the age-old assumption that superiority and aggression are natural realms for boys, and demonstrates how toxic masculinity creates a disturbingly limited and potentially dangerous idea of what it is to be a man. Crucially, Boys Will Be Boys reveals how the patriarchy we live in is as harmful to boys and men as it is to women and girls, and asks what we have to do to reverse that damage. The world needs to change and this book shows the way. 'A truly vital piece of social commentary from Australia's fiercest feminist ... Read it, learn from it, and share it - this book is absolute GOLD!' AU Review