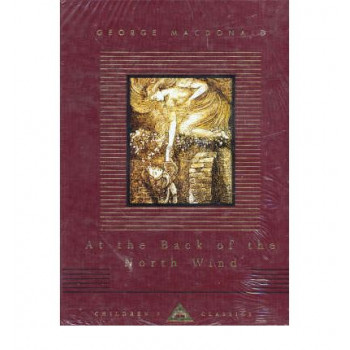 At the Back of the North Wind : Everyman's Library Children's Classics

With 13 children of his own clamouring for bedtime stories it isn't surprising that author George MacDonald discovered he had a gift for composing fairy tales. But these were fairy tales with a difference. At the Back of the North Wind, the first to be published, became a Victorian favourite and marked something of a milestone in children's fiction. While owing a debt to Hans Andersen, Dickens and Kingsley, MacDonald created a distinctive imaginary world existing in parallel with the grim social realities of mid-19th-century England. "A fairy tale is not al allegory," he once remarked. It is, of course, but the trick was to disguise it, to entertain the reader as well as instruct, leaving them to draw a moral if they pleased, or else simply to enjoy the fantasy. Children for over a hundred years have been enchanted and moved by the story of Nanny the crossing sweeper, her lame friend Jim, and above all Diamond, the poor coachman's son, whose life is transformed by a brief glimpse of a beautiful country "at the back of the north wind". The first edition (1871) was illustrated by the pre-Raphaelite artist Thomas Hughes, whose romantic and highly individualistic drawings are reproduced in the Everyman edition.