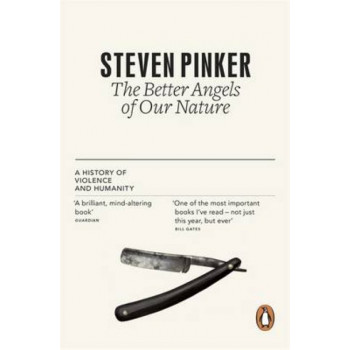 This title is shortlisted for the Samuel Johnson Prize 2012. This acclaimed book by Steven Pinker, author of "The Language Instinct" and "The Blank Slate", argues that, contrary to popular belief, humankind has become progressively less violent, over millenia and decades. Can violence really have declined? The images of conflict we see daily on our screens from around the world suggest this is an almost obscene claim to be making. Extraordinarily, however, Steven Pinker shows violence within and between societies - both murder and warfare - really has declined from prehistory to today. We are much less likely to die at someone else's hands than ever before. Even the horrific carnage of the last century, when compared to the dangers of pre-state societies, is part of this trend. Debunking both the idea of the 'noble savage' and an over-simplistic Hobbesian notion of a 'nasty, brutish and short' life, Steven Pinker argues that modernity and its cultural institutions are actually making us better people. "One of the most important books I've read - not just this year, but ever...For me, what's most important about "The Better Angels of Our Nature" are its insights into how to help achieve positive outcomes. How can we encourage a less violent, more just society, particularly for the poor? Steven Pinker shows us ways we can make those positive trajectories a little more likely. That's a contribution, not just to historical scholarship, but to the world". (Bill Gates). "Brilliant, mind-altering...Everyone should read this astonishing book". (David Runciman, "Guardian"). "A supremely important book. To have command of so much research, spread across so many different fields, is a masterly achievement. Pinker convincingly demonstrates that there has been a dramatic decline in violence, and he is persuasive about the causes of that decline". (Peter Singer, "New York Times"). "[A] sweeping new review of the history of human violence...[Pinker has] the kind of academic superbrain that can translate otherwise impenetrable statistics into a meaningful narrative of human behaviour ...impeccable scholarship". (Tony Allen-Mills, "Sunday Times"). "Written in Pinker's distinctively entertaining and clear personal style...a marvellous synthesis of science, history and storytelling". (Clive Cookson, "Financial Times"). "Pinker's scholarhsip is astounding ...flawless ...masterful". (Joanna Bourke, "The Times"). Steven Pinker is the Johnstone Family Professor in the Department of Psychology at Harvard University. Until 2003, he taught in the Department of Brain and Cognitive Sciences at MIT. He conducts research on language and cognition, writes for publications such as "The New York Times", "Time" and "Slate", and is the author of six books, including "The Language Instinct", "How the Mind Works", "The Blank Slate" and "The Stuff of Thought".