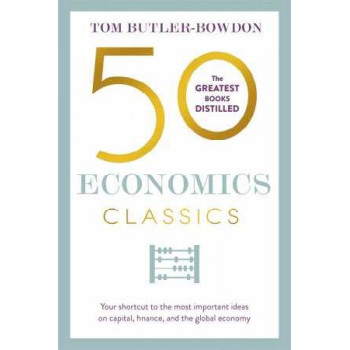 50 Economics Classics: Your Shortcut to the Most Important Ideas on Capital, Finance and the Global Economy

From Karl Marx to Naomi Klein, from The Wealth of Nations to Piketty's Capital, here are the 50 most important titles on finance and world economy distilled. 50 Economics Classics considers the legacy of some of the great names including Ricardo, Keynes, Malthus and Friedman, and highlights the work of newer writers including Piketty, Luigi Zingales and Enrico Moretti. It presents the most influential titles on finance and work economy, from JL Galbraith's and Ben Bernanke's explanations of the Great Depression, to Robert Shiller's spotlight on the tech bubble, to Michael Lewis's insights into the causes of the 2008 financial crisis. These are the great reads, novel ideas and famous texts in international political economy - illuminated and clarified for all.