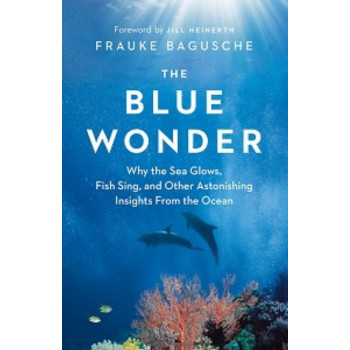 Blue Wonder: Why the Sea Glows, Fish Sing, and Other Astonishing Insights from the Ocean

An intimate account of the beauty and mystery of the ocean, including why, with each breath, we are inextricably linked to its 'blue wonder' Astonishing events occur beneath the sea: a mysterious glow beckons at night, the smallest organisms play the largest role, and fish, who seem so taciturn, converse with each other - loudly. But we only know a fraction of the sea, despite its size and intrigue - even the moon's surface has been studied more than the ocean's depths. In The Blue Wonder, marine biologist and diver Frauke Bagusche brings readers along with her into the ocean. Drawing on scientific discoveries and playful analogies to explain its mysteries, she reveals deep-sea reefs that glitter like glass, an octopus who imitates more than fifteen other animals, weddings among coral, underwater drugstores, and even fish that clean her own teeth. With the heart of a poet and reason of a scientist, Bagusche awakens our love for the sea and the desire to protect this vital habitat far into the future.