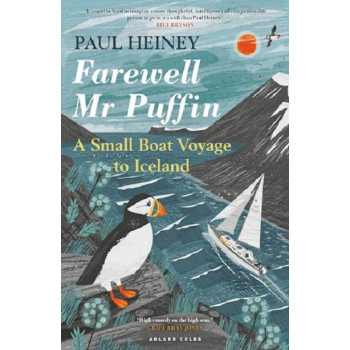 The puffin is the joker amongst the seabirds of the north Atlantic, but what is happening to this much-loved bird is far from a laughing matter. This is the conclusion of writer and broadcaster, Paul Heiney, who set sail from the east coast of England bound for Iceland, propelled by a desire to breathe the cool, clear air of the high latitudes - which he loves - but also to follow in the wake of generations of sailors who have made this often treacherous journey since the 13th century. In the small coastal town where he lives, aged faces of long-gone seafarers stare down from the walls of the museum, urging him onwards. The northern air gave him a new clarity of vision, and in almost every harbour he tripped over maritime history and anecdote, and came face to face with some of his own past as he sailed north along his childhood coastline of east Yorkshire. He imagined the terrified monks as the first Viking invaders appeared over the horizon; on Orkney the legend of Saint Magnus inspired him, on the Faroes he struggled with the rights and wrongs of the islands' whale hunters. With the typical good humour which ran through his last book for Bloomsbury, 'One Wild Song', Heiney writes about the ups and downs of voyaging under sail, his rib-crunching fall from the harbour wall on Iceland's remote north coast, the failure of the heater as the Arctic Circle was crossed, the perils of facing Iceland's idea of fast food - half a sheep's head - and the capture, confrontation and eventual devouring of a cod five feet long. But there was one major thing missing from this voyage - the sight of puffins. They are remarkable birds, spending the entire winter in the tumultuous north Atlantic before returning to the same nest and mate every year when the spring comes. And with them comes something as uplifting as a ray of sunshine after a storm. The puffin has a reputation as the joker of the seas, the clown of the bird world, and to see them and share their waters was also part of Heiney's ambition. Imagine then his disappointment when, first, no puffins appeared off the Farne Islands, then none to be seen on puffin hotspots like Orkney. At first he thought he was just unlucky, and he is certainly no ornithologist, and thought his amateur observation might be at fault. But when he failed to see puffins on Iceland, it was the last straw, and he started to become seriously concerned. Puffins are in decline everywhere, he discovered, and there is a multiplicity of reasons why that might be. Heiney senses that a new chapter is about to be written, and it is one in which we may have to say farewell to the puffin forever. This is book is rich in travel and sailing narrative, natural and social history, and with a strong undercurrent of good humour. It provides not only an insight into the private life of the puffin, but an honest portrait of human life on the ocean waves, as well as a reflection on what we might lose if the puffin disappears from our icy northern waters.