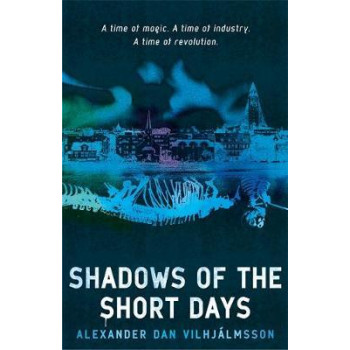 Shadows of the Short Days

A strikingly original Icelandic debut set in a strangely familiar alternate Reykjavik where wild and industrialised magic meet. Perfect for fans of contemporary fantasy in the style of Lev Grossman's THE MAGICIANS or China Mieville's THE CITY & THE CITY S mundur the Mad, addict and sorcerer, has been expelled from the magical university, Svartiskoli, and can no longer study galdur, an esoteric source of magic. Obsessed with proving his peers wrong, he will stop at nothing to gain absolute power and knowledge, especially of that which is long forbidden. Garun is an outcast: half-human, half-huldufolk, her very existence is a violation of dimensional boundaries, the ultimate taboo. A militant revolutionary and graffiti artist, recklessly dismissive of the status quo, she will do anything to achieve a just society, including spark a revolution. Even if she has to do it alone. This is a tale of revolution set in a twisted version of Reykjavik fuelled by industrialised magic and populated by humans, interdimensional exiles, otherworldly creatures, psychoactive graffiti and demonic familiars.