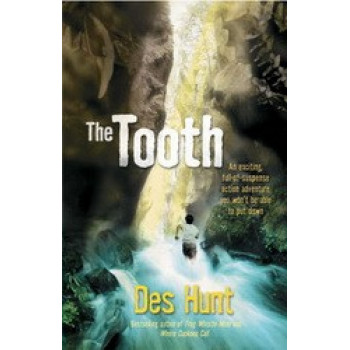 Tim Thomas is searching for dinosaur fossils in the hills above Pounamu, his grandparent's sheep station. His mum drowned when he was four, leaving Tim with only a vague memory of her - and of a large tooth embedded in rock. But time is against him as he races to find the exact spot where the tooth lies, before the river gully is dammed and the rising waters cover the site. He also has to deal with Sam Mason, the school bully, and when Tim's horse is stolen his attempts to get her back bring him up against a gang of horse thieves. And then when it starts to rain, the waters begin to rise, and Tim is in trouble. Deep trouble. Des Hunt specializes in exciting action-packed adventures set in the natural landscapes of New Zealand. This is his sixth novel since A Friend in Paradise, a 2003 finalist in the NZ Post Children's Book Awards, and follows the success of The Moa Cave, 2007 finalist Frog Whistle Mine, Where Cuckoos Call and Shadows in the Ice. Des lives on the Coromandel Peninsula.