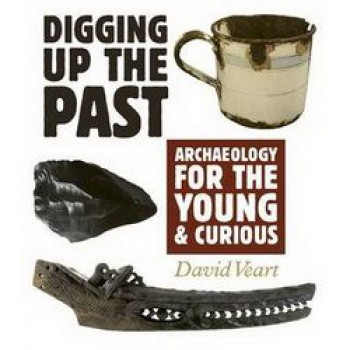 Digging Up the Past: Archaeology for the Young & Curious

After noticing his dad's plough kept pulling up interesting stones and bones on their Wairau Bar farm, a 13-year-old boy named Jim Eyles, armed with a potato fork and a piece of number-8 fencing wire, set off one day and dug up a giant moa egg. He kept digging and found Maori adzes and the bones of extinct birds until he was being visited by leading museum directors from around the country. Through a lot of digging, a pile of curiosity, and often a bit of number-8 wire, archaeologists in New Zealand have been digging up the past beneath our feet for many years. In Digging Up the Past, archaeologist David Veart introduces young and curious readers to the story of New Zealand - from Pacific voyagers to contemporary crime scenes - that those archaeologists have discovered. Along the way, readers will learn about what archaeologists actually do - from digging up shell middens to testing ancient DNA. You'll even learn how to do a little archaeological research in your own rubbish bin (WARNING: stinky work ahead!). And readers will uncover amazing facts about our past: How Maori used kuri, the native dog, as a four-legged fridge; how warplanes were hidden deep within Devonport's North Head (or were they?); how DNA has revealed the number of people who first settled Aotearoa; and much, much more. Illustrated with archaeological evidence, scientists at work, and reconstructions to show what these lost worlds actually looked like, Digging up the Past will soon have readers out on their knees digging around with a piece of wire and a pound of curiosity.