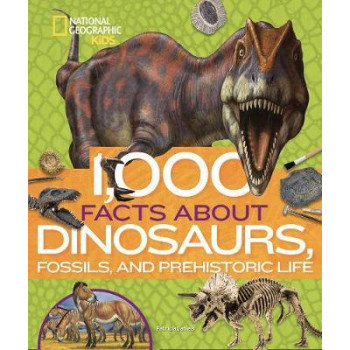 T. rex, triceratops, pterosaurs, saber tooth cats! This colourful reference book is jam-packed with 1,000 fascinating facts about what these prehistoric creatures looked like, how they lived, and the evidence they left behind. From dinosaurs like Stegosaurus and Giganotosaurus that ruled the land, to the mammoths and giant sloths that followed them, discover all you have ever wanted to know about dinosaurs, fossils, and prehistoric life. Uncover amazing fossil facts about the first four-legged creatures; find out what it's like to be on a dinosaur dig; and marvel at some of the fiercest, most fascinating claws and teeth. Learn how dinosaurs and birds are connected, find out the biggest prehistoric mysteries that scientists are still trying to crack, and sink your teeth into some seriously super-size dino stats.