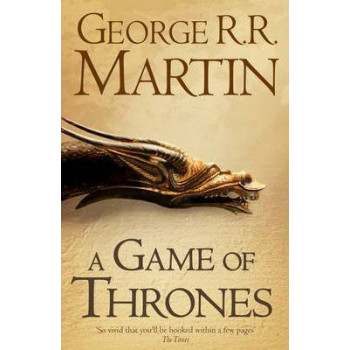 The most powerful, original and absorbing new epic since Stephen Donaldson's Chronicles of Thomas Covenant. The first volume of George R R Martin's glorious high fantasy tells the tragic story of treachery, greed and war that threatens the unity of the Seven Kingdoms south of the Wall. Martin unfolds with astonishing skill a tale of truly epic dimensions, thronged with memorable characters, a story of treachery and ambition, love and magic. Set in a fabulous world scarred by battle and catastrophe over 8000 years of recorded history, it tells of the deeds of men and women locked in the deadliest of conflicts and the terrible legacy they will leave their children. In the game of thrones, you win or you die. And in the bitter-cold, unliving lands beyond the Wall, a terrible winter gathers and the others -- the undead, the neverborn, wildlings to whom the threat of the sword is nothing -- make ready to descend on the realms of men. A Game of Thrones begins the most imaginative, ambitious and compelling fantasy epic since The Lord of the Rings. Thronged with memorable characters, it unfolds with astonishing skill a tale of truly epic dimensions. There have been many pretenders to the throne of Tolkien: now at last he has a true heir.