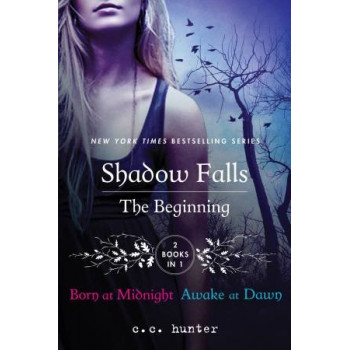 Two Books in One: Born at Midnight and Awake at Dawn. One night Kylie Galen finds herself at the wrong party, with the wrong people, and it changes her life forever. Her mother ships her off to Shadow Falls - a camp for troubled teens, but it soon becomes clear that the kids at Shadow Falls are far from ordinary. They're supernatural - learning to harness their powers, control their magic and live in the normal world. Kylie's never felt normal, but surely she doesn't belong here with a bunch of paranormal freaks either. Or does she? They insist Kylie is one of them, and that she was brought here for a reason... if she can only figure out why, and what her burgeoning powers mean. As if life wasn't complicated enough, enter Derek and Lucas. Derek's a half Fae who's determined to be her boyfriend, and Lucas is a smokin' hot werewolf with whom Kylie shares a secret past. Both Derek and Lucas couldn't be more different, but they both have a powerful hold on her heart. As Kylie struggles to make sense of her feelings and her new abilities, the dark side of the supernatural world emerges and makes life a whole lot harder. An evil enemy lurking in the shadows is about to threaten everything she holds dear... and bring her closer to her destiny.