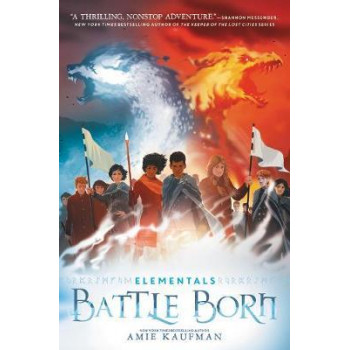 The much-anticipated finale to Amie Kaufman's epic middle-grade trilogy Though Anders and his friends have delayed a war between the ice wolves and scorch dragons, their mission isn't over. With adults on both sides looking for them, they've sought refuge in Cloudhaven, a forbidden stronghold created by the first dragonsmiths. The ancient text covering Cloudhaven's walls could be the key to saving their home - if only the young elementals could decipher it. To make matters worse, Holbard is in ruins and its citizens are reeling. Many have been forced into bleak camps outside the city, and food is running short. To rebuild Vallen, Anders, Rayna, and their allies must find a way to unite humans, ice wolves, and scorch dragons before they lose their last chance. In the final book of international bestselling author Amie Kaufman's sensational adventure series, Anders and Rayna must put everything on the line - and the price of peace may hit closer to home than they could've ever imagined. PRAISE FOR SCORCH DRAGONS: 'I found a satisfying fantasy world like none I have read before - one in which dragons and wolves take human form and have magical powers. One of the strengths of this book is the exploration of the idea that truth is a matter of perspective - that there are two (or more) sides to every story. There is no clear enemy, the conflict arises from the tension between the dragons and the wolves, and the reader can empathise with both sides, even though many of the adults in the story cannot ... This is a great book for middle-grade readers 8-12.' - Reading Time PRAISE FOR ICE WOLVES: 'An engaging world and cliffhanger ending leave readers wanting more' - Kirkus, starred review 'Engaging to the end' - Books+Publishing 'you'll wind up on the edge of your seat, unable to put it down' - New York Times bestseller Meagan Spooner 'A thrilling, nonstop adventure' - New York Times bestseller Shannon Messenger