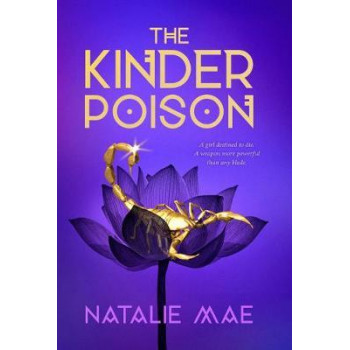 Perfect for fans of Victoria Aveyard and Holly Black, The Kinder Poison is an enthralling fantasy adventure that follows a teenage girl chosen to be the human sacrifice in a deadly game between three heirs who will do anything for the crown. In the magical kingdom of Orkena, Zahru has long dreamed of a life beyond the desert, even though she knows her lowly position as a stable girl who can commune with animals will never afford her such a luxury. All that changes when the ailing ruler invokes an ancient tradition known as the Crossing. It's a death-defying race across the desert, in which the first of his heirs to finish--and take the life of a human sacrifice at the journey's end--will ascend to the throne and be granted unparalleled abilities. As preparations and celebrations commence, Zahru jumps at the chance to experience a small taste of glamour by sneaking into the palace. But the minor indiscretion quickly turns into the worst mistake of her life as she gets caught up in a feud between the heirs and is ultimately forced to become the Crossing's human sacrifice. Zahru is left with only one hope for survival- somehow figuring out how to overcome the most powerful people in the world.