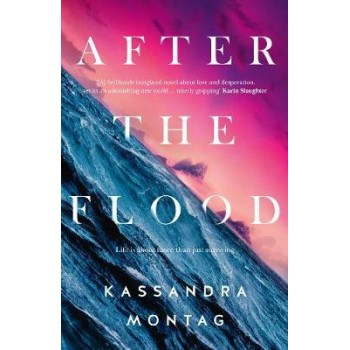 Life is about more than just surviving... An unforgettable, inventive, and riveting epic saga about a mother, her daughter and their struggle to survive in a post-apocalyptic flooded world, which signals the arrival of an extraordinary new talent. It's 2031, and the world has been utterly transformed. After years of rising floodwaters, all that's left is an archipelago of mountaintop colonies surrounded by a deep expanse of open water. Civilization as it once was is gone. Bands of pirates roam the waters, in search of goods and women to breed. Some join together to create a new kind of society, while others sail alone, barely surviving. Myra and her young daughter, Pearl, survive by fishing from their small boat, visiting small hamlets and towns on dry land to trade for supplies and information. The sole purpose of Myra's existence is to protect Pearl, while mourning the loss of her oldest daughter, Row, who was kidnapped during the last terrifying storm surge. For eight years Myra has searched for the girl that she knows, in her bones and her heart, still lives. In a violent confrontation with a stranger, Myra hears that Row was last seen in a far-off encampment of raiders on the coast of what used to be Greenland. Throwing aside her usual caution, she and Pearl embark on a perilous voyage into the icy northern seas to rescue her. A compulsively readable novel of dark despair and soaring hope, After the Flood is a magnificent, exhilarating, action-packed, and sometimes frightening odyssey laced with wonder - an affecting and wholly original saga, both redemptive and astonishing. 'The searing, often brutal story of a mother's terrifying quest to find her missing daughter in a post-apocalyptic world. Haunting and shocking.' Liv Constantine, bestselling author of The Last Mrs. Parrish '[A] brilliantly imagined novel about love and desperation, set in an astonishing new world ... utterly gripping' Karin Slaughter, international bestselling author of The Last Widow 'An intriguing and innovative woman-centered swashbuckling quest narrative' Publishers Weekly