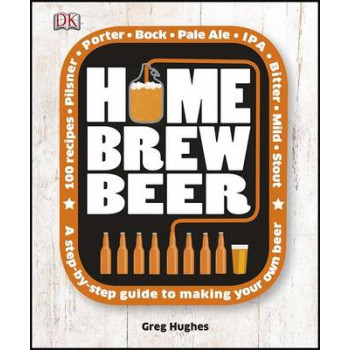 This is a step-by-step guide to brewing your own beer at home. If you're keen to learn how to make your own beer at home, but need a manual that not only provides instructions, but recipes too, then Home Brew Beer will be your very own brewing bible. Home Brew Beer includes over 100 home brew beer recipes from around the world with brewer's tips and photographs of the finished beer so you know what you're aiming for. Plus this ultimate reference book provides techniques for three levels of difficulty for beer making, allowing you to brew beer from a basic kit, malt extract, or using the full grain method the professionals use. Recipes are categorised by beer style including every variation of ale, lager, and hybrid beers, with beer-style overviews describing the typical appearance, flavour, aroma, and strength of each style of beer. You'll also learn the science behind the brewing process and handy timelines and step-by-step photographs show you what to do at every stage of the brewing process. Home Brew Beer is great for beginner home brewers needing clear explanations, more accomplished brewers who want to take their interest of beer making to the next level, or anyone looking for a wealth of delicious and satisfying beer recipes.