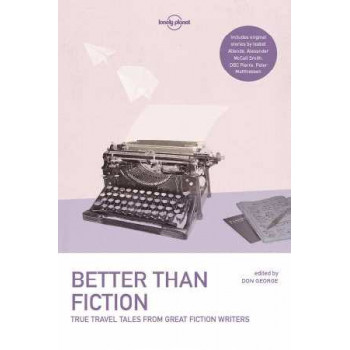 "...a brilliant collection of travel stories...threaded with great warmth, as readers are invited to travel in the company of these famous authors and experience their passions and revelations." BOOKSELLER + PUBLISHER We asked some of the world's most acclaimed fiction authors, including Isabel Allende, Peter Matthiessen, Alexander McCall Smith, Joyce Carol Oates, Tea Obreht and DBC Pierre, to describe their greatest non-fictional journeys. The 32 stories collected in Lonely Planet's Better than Fiction touch on everything from disorientation and revelation to disillusion and redemption. However, these real-life tales all share one common characteristic: a passion for the precious gift that travel confers, from its unexpected but inevitably enriching lessons about other peoples and places, to the truths it reveals about ourselves. By turns funny, poignant and thought-provoking, you'll be transported from Azerbaijan to Vietnam, via Iceland, India, Samoa, Scotland, Antarctica, Alaska, Argentina, Nicaragua, Rome, Saudi Arabia, South Africa and beyond. Edited by travel writer Don George. Also available: Lonely Planet Better than Fiction 2 About Lonely Planet: Lonely Planet is a leading travel media company and the world's number one travel guidebook brand, providing both inspiring and trustworthy information for every kind of traveller since 1973. Over the past four decades, we've printed over 145 million guidebooks and grown a dedicated, passionate global community of travellers. You'll also find our content online, on mobile, video and in 14 languages, 12 international magazines, armchair and lifestyle books, ebooks, and more. Follow us on Facebook (facebook.com/lonelyplanet), Twitter (@lonelyplanet), Instagram (Instagram.com/lonelyplanet) and Snapchat (@lonelyplanet). TripAdvisor Travelers' Choice Awards 2012, 2013, 2014, 2015 and 2016 winner in Favorite Travel Guide category 'Lonely Planet guides are, quite simply, like no other.' - New York Times 'Lonely Planet. It's on everyone's bookshelves; it's in every traveller's hands. It's on mobile phones. It's on the Internet. It's everywhere, and it's telling entire generations of people how to travel the world.' - Fairfax Media (Australia)