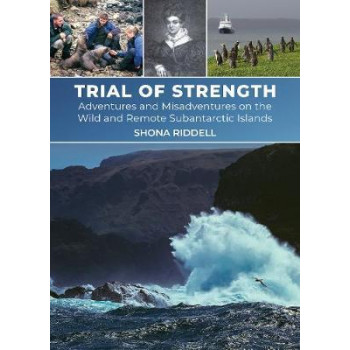 Trial of Strength: Adventures and misadventures on the wild and remote subantarctic islands

The world's subantarctic islands circle the lower part of the globe below New Zealand, Australia, Africa and South America in the 'Roaring Forties' and 'Furious Fifties' latitudes. They are filled with unique plants and wildlife, constantly buffeted by lashing rain and furious gales, and surrounded by a vast, powerful ocean. New Zealand and Australian subantarctic islands in particular have a rich and fascinating human history, from the early 19th-century explorers and sealers through to modern-day conservation and adventure tourism. And yet, the subantarctic islands are often called our 'forgotten islands' because so few people know of their existence, despite their status since 1998 as World Heritage sites. Trial of Strength is a history book filled with compelling photos for a modern audience, and one that, for the first time, includes women's stories as more than just a footnote. Balanced and engaging, it features classic tales of infamous shipwrecks, lesser-known stories of intrepid pioneers, as well as more recent stories of adventure tourism, conservation wins, and dramatic helicopter rescues. Written by the descendant of two 19th-century British colonial settlers who attempted to create a home for their young family in this bleak environment, Trial of Strength will leave you with an appreciation for the tenacity of the human race and the forbidding forces of nature.