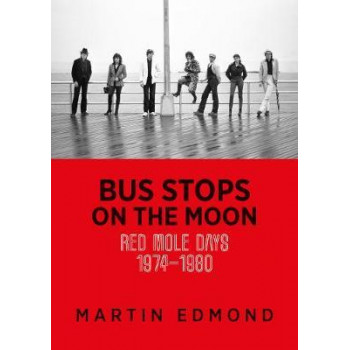 Bus Stops on the Moon is a personal and a cultural history. As memoir, it is a sequel to The Dreaming Land (2015). A troubled and restless young Martin Edmond is on his way to becoming the wiser, older man who will sit down and write both narratives. As cultural history, the book gives us a participant's-eye view of the early years of Alan Brunton and Sally Rodwell's avant-garde theatre troupe Red Mole. Formed in 1974, Red Mole performed Dadaesque cabaret, agit-prop, costume drama, street theatre, circus and puppetry, live music, and became a national sensation. They toured the country with Split Enz and travelled internationally. One of Red Mole's five founding principles was 'to escape programmed behaviour by remaining erratic'. They ticked that one off. In Bus Stops on the Moon Martin Edmond offers, with his customary elegance, a rich and entertaining picture of the high times and low lives of Red Mole. From reviews of The Dreaming Land: . a beautifully written book - Peter Simpson (The Best Books of 2015, The Spinoff, 1 December 2015) . a detailed autobiographical recreation of the past, filtered through the consciousness of one of our finest writers. - David Herkt (Stuff, 4 November 2015) AUTHOR Martin Edmond was born in Ohakune, New Zealand, and lives in Sydney, Australia. He has worked as a lighting designer in theatre and for rock bands, and as a screenwriter in the film industry. He holds a Doctorate of Creative Arts from Western Sydney University and is the author of more than twenty books, most of which can be described, loosely, as works of nonfiction. The most recent was The Expatriates (Bridget Williams Books, 2017).