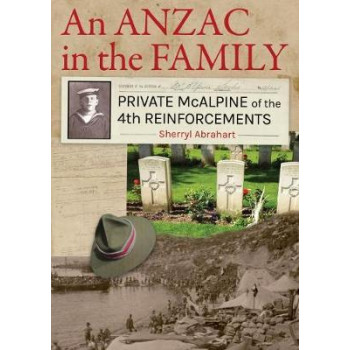 Anzac in the Family

Many families in New Zealand have an Anzac who served in WW1. Private Leslie McAlpine could have been any one of thousands of young men who left family and friends to serve his country. He was a fit, healthy young man when he left New Zealand and never completely lost hope that he would get back home. His story illustrates how decisions made in the wider world can affect our lives and opportunities. Using stories passed down by Leslie's brothers and sisters, An ANZAC in the FAMILY shows the pride, the worry and the painful loss felt by them and Leslie's parents. An ANZAC in the FAMILY follows the lives and eventual fate of Leslie and the other 2,234 men in the 4th Reinforcements - a group that don't feature in many of the accounts of the First World War. The Main Body are well known because they were involved in the landing at Gallipoli on April 25. Later Reinforcements went straight to Europe and fought on the Western Front. Their men wrote journals, published newsletters and took more photos that have survived. But the 4th Reinforcements have a proud tradition. Members fought at Gallipoli, Egypt, Salonika and the Western Front. They did it all. Based on two years of research, An ANZAC in the FAMILY includes a complete listing of all 2,235 men: name, rank, where they came from and, if they were killed, where they are buried.