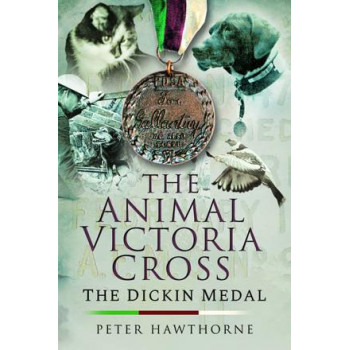 Sixty-three animals have won the Dicken Medal, the highest award for animal bravery. Their inspiring stories are told, for the first time in one book, The Animal Victoria Cross. Four types of animal have been honoured, dogs, horses, pigeons and one cat. Simon, the feline, is credited with saving an entire ships crew. Canine breeds include Alsatians, Terriers, Collies and Spaniels. The majority of awards were related to war service and the conflicts include the Second World War, Korea, Iraq, Yugoslavia and Afghanistan. The Al-Qaeda attack on the Twin Towers as well as the Blitz saw great courage exhibited by animals such as Rip, the dog who saved many lives. In addition to British animals, there are American, Canadian, Australian and Egyptian winners of this unique award. This delightful book will be treasured by animal lovers everywhere. It is ideal to dip into or read from cover to cover. AUTHOR: Peter Hawthorne is Head of History and Lecturer in Law at Stafford College. He lives near Telford, Shropshire. 16 b/w images