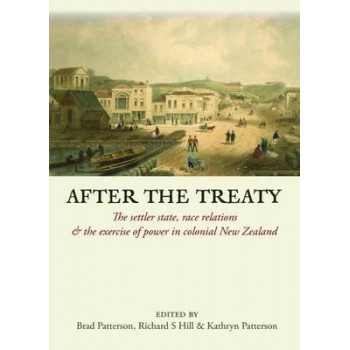 After the Treaty: The Settler State, Race Relations & the Exercise of Power in Colonial New Zealand

The essays in After the Treaty explore themes ranging from contem-porary interpretation of the Treaty of Waitangi and subsequent interactions between settlerdom and Maori, through the troubled aftermath of the armed conflicts of the 1840s and 1860s (such as the Crown's imperative to place settlers on Maori land), to surveillance of citizens by the settler state and the origins of New Zealand diplomacy. Conceived as a tribute to Ian McLean Wards (1920-2003), who for some six decades - as researcher and writer, civil servant and cultural activist - contributed significantly and unstintingly to promoting greater public awareness of New Zealand's history in all its facets, the authors include both former colleagues and younger scholars exploring themes in which Wards had a particular interest. Whether reflecting upon relevant earlier research and writing (including Wards' own), or tackling their subjects primarily through the lens of more recent historical investigation or analysis, together these essays provide new insights into vital issues in nineteenth-century New Zealand colonial history. An important collection of essays which adds significantly to New Zealand historiography, and a worthy memorial to Ian Wards' pioneering book Shadow of the Land. - Professor Richard Boast qc, Victoria University of Wellington This collection of timely, challenging and erudite essays is a fitting tribute to the late Ian Wards ...that staunch yet stylish defender of state-sponsored history would be delighted by the perception and deep scholarship revealed in every chapter. - Professor Tom Brooking, University of Otago ...an incisive and highly readable examination of issues relating to why New Zealand history and its study is important, and a worthy tribute to a trail-blazing historian. - Lieutenant Colonel (Retired) Christopher Pugsley onzm, DPhil, FRHistS