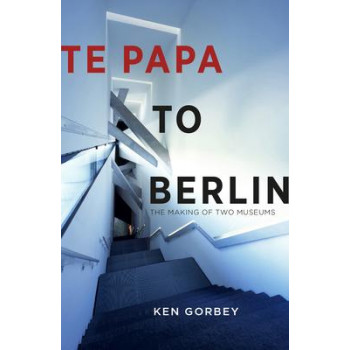 Te Papa to Berlin: The making of two museums

Ken Gorbey is a remarkable man who for 15 years was involved with developing and realising the revolutionary cultural concept that became Te Papa Tongarewa Museum of New Zealand. Then in 1999 he was headhunted by W. Michael Blumenthal to salvage the Jewish Museum Berlin, which was failing and fast becoming a national embarrassment. Led by Gorbey, a young, inexperienced staff, facing impossible deadlines, rose to the challenge and the museum, housed in Daniel Libeskind's lightning-bolt design, opened to acclaim. As Blumenthal writes in the foreword: 'I can no longer remember what possessed me to seriously consider actually reaching out to this fabled Kiwi as a possible answer to my increasingly serious dilemma ...' but the notion paid off and today the JMB is one of Germany's premier cultural institutions. Te Papa to Berlin is a great story - a lively insider perspective about cultural identity and nation building, about how museums can act as healing social instruments by reconciling dark and difficult histories, and about major shifts in museum thinking and practice over time. It is also about the difference that can be made by a visionary and highly effective leader and team builder.