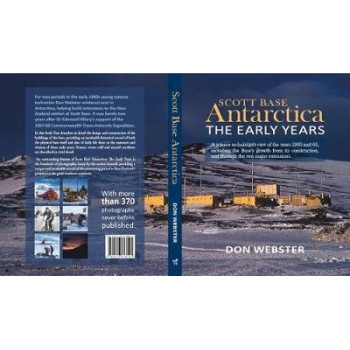 Scott Base Antarctica The Early Years: A Science Technician's View of the Years 1960 and 63, including the Base's growth from its construction, and th

For two periods in the early 1960s young science technician Don Webster wintered over in Antarctica, helping build extensions to the New Zealand station at Scott Base. It was barely two years after Sir Edmond Hillary's record-breaking 1957-58 Commonwealth Trans-Antarctic Expedition. In this book Don describes in detail the design and construction of the buildings of the base, providing an invaluable historical record of both the physical base itself and also of daily life there in the summers and winters of those early years. Storms, severe cold and aircraft accidents are described in vivid detail. An outstanding feature of Scott Base Antarctica: The Early Years is the hundreds of photographs, many by the author himself, providing a unique and invaluable record of this pioneering period in New Zealand's presence in the great southern continent.