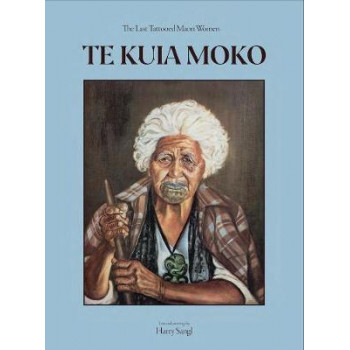 Te Kuia Moko is a taonga recording 34 Maori women, all bearing moko kauae(chin tattoos). First published in 1980 as The Blue Privilege, this new printing evidences the book's ongoing importance as a record of moko art. Arriving in New Zealand in 1969, Harry Sangl believed that kuia with moko kauae were of a bygone era. But in March 1972 he saw a photograph of a centenarian Maori woman with a moko and set out to find her, reaching her in Ruatoki, near the Urewera ranges. From there he embarked on a three-and-a-half-year journey around New Zealand to paint the last remaining kuia with moko, many of whom were of Ngai Tuhoe descent. Most of Sangl's subjects were born in the nineteenth century, the oldest around 1850. The period of tattooing was approximately from 1885-1940. Biographies of the women are printed substantially as they spoke them, supplemented by essays by Merimeri Penfold and D.R. Simmons. The records are accompanied by black-and-white sketches of the kuia's moko - complementing the beautiful, full colour paintings.