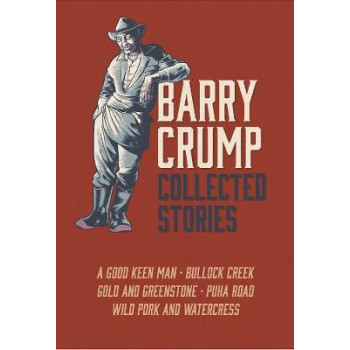 Barry Crump was one of New Zealand's most popular authors ever, selling over 1 million copies of his 24 books between the publishing of A Good Keen Man in 1960 through to his death in 1996. Though the reputation he gained in the wake of his turbulent personal life sometimes overshadows his literary career, he remains a superb storyteller, who perfectly captured the lifestyle and laconic humour of the rugged Kiwi outdoors man. His ability to craft a tale that is both moving and funny is superbly illustrated by the huge international success of the movie Hunt for the Wilderpeople, which is based on his book Wild Pork and Watercress. Almost all of Barry Crump's books are now out of print. This new volume of Collected Stories remedies that, by presenting five of his great classics in a handsome, hardback edition. The stories are: A Good Keen Man | Bullock Creek | Gold and Greenstone | Wild Pork and Watercress | Puha Road Barry Crump: Collected Stories belongs on the bookshelf of every New Zealand home, an important, highly enjoyable and often hilarious part of our literary heritage.