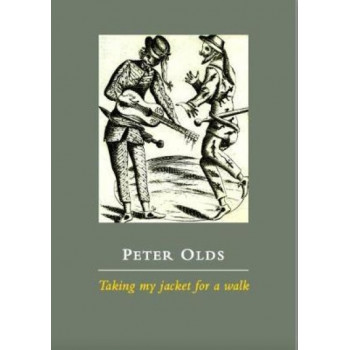 Taking My Jacket for a Walk

"Today, it's the jacket's turn to take me for a walk instead of the dog." In this new collection, Dunedin's unofficial but authentic poet laureate--between revisiting 1950s childhood and destroying a stadium--encounters Basho returning from a hike on Mount Cargill, imagines Robert Falcon Scott's last night in Dunedin, and asks the Occasional Big Question: "Childishly I ask for a sign: / a sign of some sort to show the way clear, /a path that might lead to some meaningful place."Reviewing YOU FIT THE DESCRIPTION, Peter Olds's selected poems (Cold Hub Press, 2014), Bill Direen wrote: "[H]is is a poetry of steady reflection upon people and things, the material world about him and those funny, delightful and doomed souls that once made Dunedin a city of 'psychiatric clinics, pubs and bookstores' ...The years have taught Peter Olds how to reveal humanity by means of simple enough tools: his engaging voice, acumen, a gesture or a phrase isolated and noted, evocation of the scene, control of the pause, and humour." "Peter Olds's poems are often moving and gruelling for their honesty about both the euphoria and the aftermath of pushing oneself to the edge of experience. They're often vivid, visual, social realist and darkly wry pictures of New Zealand city and town life. They can give the impression of being spontaneous photographs, apparently casually documentary. And yet the more you re-read them, the clearer it is that they are carefully, consciously framed. Laced throughout with a redemptive wit and humour, they are frank about workers', bohemians' and beneficiaries' struggles with institutions, conformity, urban disconnection and alienation; and frank about the tenuous grip many New Zealanders have, post welfare state reforms, on basic comforts and human rights: health, shelter, community, a place to stand and belong." --Emma Neale