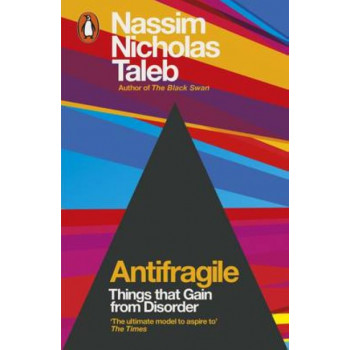 Antifragile: Things That Gain from Disorder

"The hottest thinker in the world". (Bryan Appleyard, "Sunday Times"). In "The Black Swan", Taleb showed us that highly improbable and unpredictable events underlie almost everything about our world. Here Taleb stands uncertainty on its head, making it desirable, even necessary. The antifragile is beyond the resilient or robust. The resilient resists shocks and stays the same; the antifragile gets better and better. Just as human bones get stronger when subjected to stress and tension, many things in life benefit from stress, disorder, volatility, and turmoil. What Taleb has identified and calls antifragile are things that not only gain from chaos but need it in order to survive and flourish. What's more, the antifragile is immune to prediction errors and protected from adverse events. Why is the city-state better than the nation-state, why is debt bad for you, and why is what we call "efficient" is not efficient at all? Why should you write your resignation letter before starting on the job? How did the sinking of the Titanic save lives? "Antifragile" is a blueprint for living in a Black Swan world. Erudite, witty, and iconoclastic, Taleb's message is revolutionary: the antifragile, and only the antifragile, will make it. Nassim Nicholas Taleb has devoted his life to problems of uncertainty, probability, and knowledge and has led three careers around this focus, as a businessman-trader, a philosophical essayist, and an academic researcher. Although he now spends most of his time working in intense seclusion in his study, in the manner of independent scholars, he is currently Distinguished Professor of Risk Engineering at New York University's Polytechnic Institute. His main subject matter is "decision making under opacity," that is, a map and a protocol on how we should live in a world we don't understand. His books "Fooled by Randomness" and "The Black Swan" have been published in thirty-three languages. Taleb believes that prizes, honorary degrees, awards, and ceremonialism debase knowledge by turning it into a spectator sport.