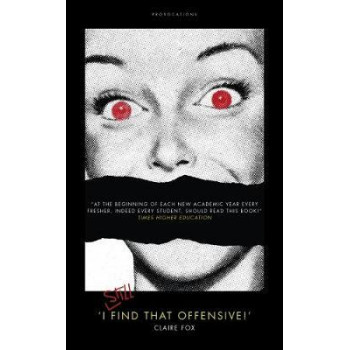 'I STILL Find That Offensive!'

NEW AND UPDATED EDITION OF THE BOOK THAT INTRODUCED THE TERM `SNOWFLAKE' When you hear that now ubiquitous phrase `I find that offensive', you know you're being told to shut up. While the terrible murder of the Charlie Hebdo cartoonists demonstrated that those who offend can face the most brutal form of censorship, it also served to intensify the pre-existing climate that dictates we all have to walk on eggshells to avoid saying anything offensive - or else. Indeed, competitive offence-claiming is ratcheting up well beyond religious sensibilities. So, while Islamists and feminists may seem to have little in common, they are both united in demanding retribution in the form of bans, penalties and censorship of those who hurt their feelings. But how did we become so thin-skinned? In this new and updated edition of her book `I Find That Offensive!' Claire Fox addresses head on the possible causes of what is fast becoming known as `Generation Snowflake' in a call to toughen up, become more robust and make a virtue of the right to be offensive.