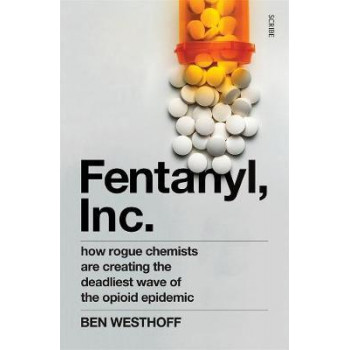 An undercover investigation into the synthetic-drug epidemic. A new group of chemicals is radically transforming the recreational-drug landscape. Known as novel psychoactive substances (NPS), they range from so-called 'legal highs' like Spice, to synthetic opioids - most famously, the deadly fentanyl. Designed to replicate the effects of established drugs like cocaine, ecstasy, marijuana, and heroin, NPS are synthesised in laboratories. They are cheap to produce and easy to transport. They are also extremely potent and often deadly. Originally developed for medicinal purposes, and then hijacked by rogue chemists, who change their molecular structures to stay ahead of the law, these chemicals' effects can be impossible to predict. What we do know is that they have triggered the biggest drug epidemic that America has ever seen, and which is now spreading internationally. In Fentanyl, Inc., award-winning journalist Ben Westhoff goes undercover to investigate the shadowy world of synthetic drugs - becoming, in the process, the first journalist to infiltrate a Chinese fentanyl lab. He tracks down the drug baron in New Zealand who unintentionally helped to start the synthetic-drug revolution; prowls St. Louis streets with a former fentanyl dealer to understand how the epidemic started; and chronicles the lives of addicts and dealers, families of victims, law enforcement officers, and underground drug-awareness organisers in the US and Europe. Fentanyl, Inc. is essential reading on a global calamity we are only just beginning to understand. 'This is an exceptionally useful and well-timed book. I hope anyone concerned about this era's new addiction epidemic will read it and put its messages to use. Ben Westhoff very skilfully combines pharmacology, politics, law enforcement, and gripping international intrigue in his account of America's number-one public health problem. I hope Fentanyl, Inc is widely read and influential.' -James Fallows, award-winning journalist and author of China Airborne 'Drawing material from official reports, drug databases, scores of interviews, and years of personal research, Westhoff presents an unflinching, illuminating portrait of a festering crisis involving a drug industry that thrives as effectively as it kills. Highly sobering, exemplary reportage delivered through richly detailed scenarios and diversified perspectives.' STARRED REVIEW -Kirkus Reviews 'Through his courageous reporting, Ben Westhoff takes us to the heart of the problem. In Fentanyl Inc., he shines a light on the human wreckage and damage caused by the most powerful and dangerous of the opioids, fentanyl, and its derivatives. He shows us how addiction, mislabeling, purposefully or mistakenly mixed drugs lead to tragic ends. The drug is often created out of factories operating with the permission of the Chinese government. To solve this epidemic, we must understand it. Make no mistake; the fentanyl problem is a global issue. Fentanyl Inc., is a must-read, pulling the curtain back and showing us how this human tragedy occurs and how insidious and addictive a drug can be.' -Katherine Tobin, PhD, Former Member of the U.S.-China Economic & Security Review Commission