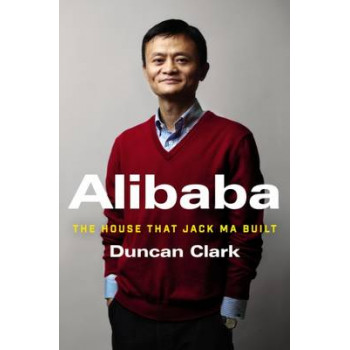 The extraordinary story of how Jack Ma, a teacher and civil servant, built one of the most valuable companies in the world and forever changed our global economy. In just a decade and half, Jack Ma built a company that rivals Walmart in value and is worth as much as Amazon and eBay. A man from humble beginnings, propelled forward by an outsize ambition and drive, Jack Ma created Alibaba, the second largest Internet company in the world and one that dominates China's e-commerce market while also serving as an icon for the country's booming private sector. Alibaba: The House That Jack Built is Duncan Clark's fascinating insider's account of how Alibaba and its charismatic creator have transformed the way the Chinese communicate, consume, and entertain, while inspiring-and enraging-entrepreneurs across the world. How, from such unremarkable origins, did Jack Ma build Alibaba? With such a large share of China's e-commerce market, how long can the company hope to maintain its dominance? And, as the company sets its sights on the country's financial sector and media markets, are there limits to Alibaba's ambitions? To understand how Alibaba came to be, we need to understand the foundations upon which the company was built-the rise of the private sector and the expansion of Internet access across China-as well as the political and social contexts in which these momentous changes took place. An expert insider with unrivaled access, Clark sheds light on the life of an unlikely corporate titan and the key role his company has played in transforming China's service economy while developing an increasingly powerful role on the world stage.