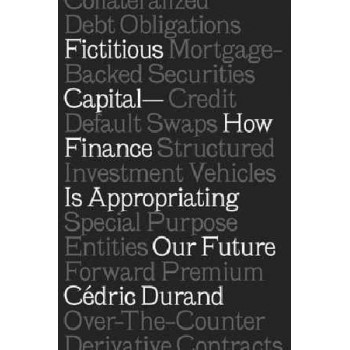 Fictitious Capital: How Finance is Appropriating Our Future

The turbulence of the financial markets is often explained in terms of the immorality of market agents, misguided economic theory or unsuitable regulation. Even when these explanations are not false ones, they leave aside the main problem: the nature of financial value. Starting out from the concept of fictitious capital, Cedric Durand argues that finance pre-empts future production, appropriating for itself wealth that is yet to be created. Using comparative data covering the last four decades, he shows that the rise in private and public debt, the enormous proliferation of financial products, the promotion of the norm that value is created for shareholders, and even public authorities' steps to encourage financial stability, all contribute to the same mechanism of social and political domination.If at one time the increasing sophistication of finance allowed the masking of the growing disconnect between the exhaustion of the production dynamic and the needs of capital, the 2007-8 crisis tore away this veil: while the hegemony of finance may well be decked out in the liberal finery of the market, each time the markets collapse, fictitious capital turns to the violence of politics.