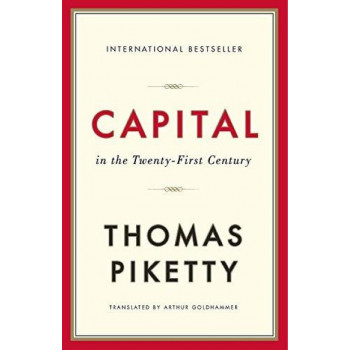 Capital in the Twenty-First Century

A New York Times #1 Best Seller An Amazon #1 Best Seller A Wall Street Journal #1 Best Seller A USA Today Best Seller A Sunday Times Best SellerWinner of the Financial Times and McKinsey Business Book of the Year AwardWinner of the British Academy MedalFinalist, National Book Critics Circle Award "It seems safe to say that Capital in the Twenty-First Century, the magnum opus of the French economist Thomas Piketty, will be the most important economics book of the year--and maybe of the decade."--Paul Krugman, New York Times "The book aims to revolutionize the way people think about the economic history of the past two centuries. It may well manage the feat."--The Economist"Piketty's Capital in the Twenty-First Century is an intellectual tour de force, a triumph of economic history over the theoretical, mathematical modeling that has come to dominate the economics profession in recent years."--Steven Pearlstein, Washington Post"Piketty has written an extraordinarily important book...In its scale and sweep it brings us back to the founders of political economy."--Martin Wolf, Financial Times"A sweeping account of rising inequality...Piketty has written a book that nobody interested in a defining issue of our era can afford to ignore."--John Cassidy, New Yorker"Stands a fair chance of becoming the most influential work of economics yet published in our young century. It is the most important study of inequality in over fifty years."--Timothy Shenk, The Nation