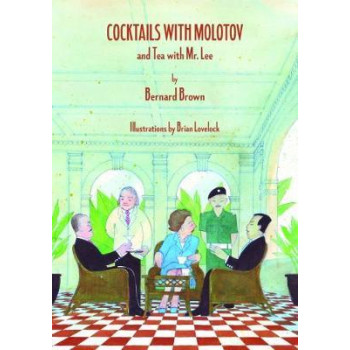 Cocktails with Molotov and Tea with Mr. Lee

Bernard Brown lived through WW2 in Suffolk, England, where he was strafed by bullets from a German Messerschmitt; dived to fetch sculpturing clay for a young Lucian Freud; went to school with the notorious gangsters the Kray brothers; and visited the Soviet Union in 1945 with his father and the British Home Secretary. As a young man he met with Margaret Thatcher, and later with famous authors such as Anthony Burgess, and Han Suyin (author of Love is a Many-Splendored Thing) with whom he fell in love. Cocktails with Molotov is an entertaining romp through Brown's wartime and post-war activities. After finishing his RAF service in Singapore in the 1950s, he studied law before emigrating to New Zealand. He has taught law at the University of Auckland ever since, including teaching such well-known figures as ex-Prime Ministers David Lange and Winston Peters. Cocktails with Molotov is his seventh published book.