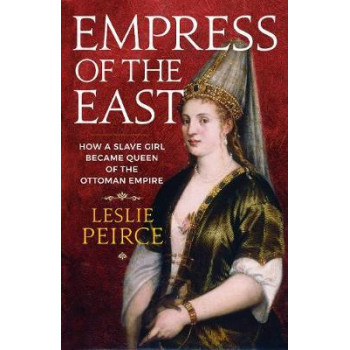 Empress of the East: How a Slave Girl Became Queen of the Ottoman Empire

Abducted by slave traders from her home in Ruthenia - modern-day Ukraine - around 1515, Roxelana was brought to Istanbul and trained in the palace harem as a concubine for Sultan Suleyman the Magnificent, ruler of the Ottoman Empire and one of the world's most powerful men. Suleyman became besotted with Roxelana and foreswore all other concubines, freeing and marrying her. The bold and canny Roxelana became a shrewd diplomat and philanthropist, helping Suleyman keep pace with a changing world in which women - Isabella of Hungary, Catherine de Medici - were increasingly close to power. Until now Roxelana has been seen by historians as a seductress who brought ruin to the empire, but in Empress of the East, acclaimed historian Leslie Peirce reveals with panache the compelling story of an elusive woman who transformed the Ottoman harem into an institution of imperial rule.