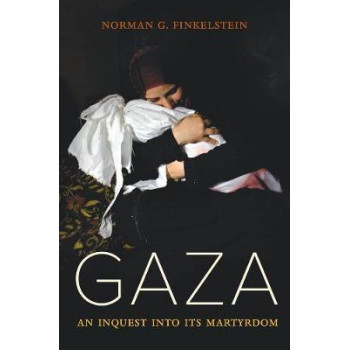 Gaza: An Inquest into Its Martyrdom

Gaza is among the most densely populated places in the world. Two-thirds of its inhabitants are refugees, and more than half the population is under eighteen years of age. Since Israel occupied Gaza in 1967, it has systematically de-developed the economy. After Hamas won democratic elections in 2006, Israel intensified its blockade of Gaza, and after Hamas consolidated its control of the territory in 2007, Israel tightened its illegal siege another notch. In the meantime, Israel has launched no less than eight military operations against Gaza-culminating in Operation Cast Lead in 2008-9 and Operation Protective Edge in 2014-that left behind over three million tons of rubble. Recent UN reports predict that Gaza will be unlivable by 2020. Norman G. Finkelstein presents a meticulously researched and devastating inquest into Israel's actions of the last decade. He argues that although Israel justified its blockade and violent assaults in the name of self-defense, in fact these actions were cynical exercises of brutal power against an essentially defenseless civilian population. Based on hundreds of human rights reports, the book scrutinizes multifarious violations of international law Israel committed both during its operations and in the course of its decade-long siege of Gaza. It is a monument to Gaza's martyrs and a scorching accusation against their tormenters.