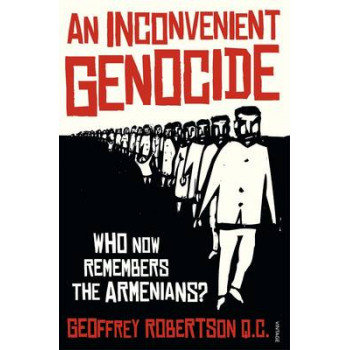 An Inconvenient Genocide: Who Remembers the Armenians?

The most controversial issue left over from the First World War - was there an Armenian Genocide? - comes to a head on 24 April 2015, when Armenians throughout the world commemorate the centenary of the murder of 1.5 million - over half - of their people, at the hands of the Ottoman Turkish government. Turkey continues to deny it ever happened - or if it did, that the killings were justified. This has become a vital international issue. Twenty national parliaments have voted to recognise the genocide, but Britain equivocates and President Obama is torn between Congress, which wants recognition, and the US military, afraid of alienating an important NATO ally. In Australia three state governments have recognised the genocide (despite threats to ban their MPs from Gallipoli), but the Abbott government has told the Turks that Australia does not. Geoffrey Robertson QC despises this mendacity. His book proves beyond reasonable doubt that the horrific events of 1915 - witnessed by Australian POWs - constituted the crime against humanity that is known today as genocide. In this book he explains how democratic countries can combat genocide denial without denying free speech, and makes a major contribution to understanding and preventing this worst of all crimes. His renowned powers of advocacy are on full display, as he condemns all those - from Sri Lanka to the Sudan, from Old Anatolia to modern Gaza - who try to justify the mass murder of children and civilians in the name of military necessity.