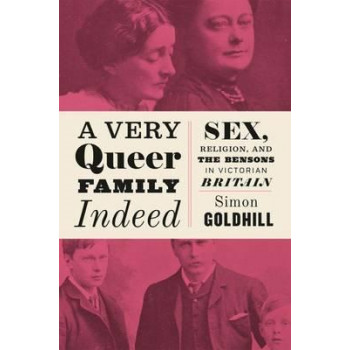 A Very Queer Family Indeed: Sex, Religion, and the Bensons in Victorian Britain

"We can begin with a kiss, though this will not turn out to be a love story, at least not a love story of anything like the usual kind." So begins A Very Queer Family Indeed, which introduces us to the extraordinary Benson family. Edward White Benson became Archbishop of Canterbury at the height of Queen Victoria's reign, while his wife, Mary, was renowned for her wit and charm the prime minister once wondered whether she was "the cleverest woman in England or in Europe." The couple's six precocious children included E. F. Benson, celebrated creator of the Mapp and Lucia novels, and Margaret Benson, the first published female Egyptologist. What interests Simon Goldhill most, however, is what went on behind the scene, which was even more unusual than anyone could imagine. Inveterate writers, the Benson family spun out novels, essays, and thousands of letters that open stunning new perspectives including what it might mean for an adult to kiss and propose marriage to a twelve-year-old girl, how religion in a family could support or destroy relationships, or how the death of a child could be celebrated. No other family has left such detailed records about their most intimate moments, and in these remarkable accounts, we see how family life and a family's understanding of itself took shape during a time when psychoanalysis, scientific and historical challenges to religion, and new ways of thinking about society were developing. This is the story of the Bensons, but it is also more than that it is the story of how society transitioned from the high Victorian period into modernity.