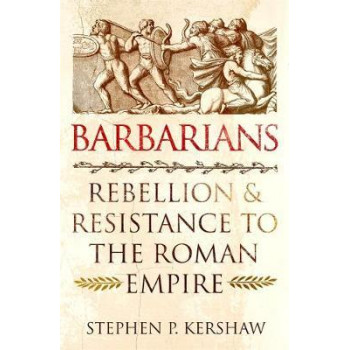 Barbarians: Rebellion and Resistance to the Roman Empire

History is written by the victors, and in the case of Rome the victors also had some extremely eloquent historians. Rome's history, as written by the Romans, follows a remarkable trajectory from its origins as a tiny village of refugees from a conflict zone, to a dominant superpower, before being transformed into the Medieval and Byzantine worlds. But throughout its rise and fall Rome faced resistance and rebellion from peoples which it regarded as barbarous and/or barbarian. These opponents of Rome's power left little in the way of their own first-hand historical accounts, but they had great deal of impact on the imaginations of the Romans, and of later ages. Resisting from outside the borders, or rebelling from within, they emerge vividly in Rome's historical tradition, and have a significant footprint in the archaeology. This new history takes a fresh and original viewpoint of Rome, building its narrative around the lives, personalities, successes and failures both of the key opponents of Rome's rise and dominance, and of the ones who ultimately brought the empire down. The book presents a selection of portrait-histories of Africans, Britons, Easterners, Egyptians, Gauls, Germans, Goths, Huns, Vandals and others which can be read individually as stand-alone pieces or collectively as a narrative 'barbarian' history of Rome. These will be based both on ancient historical writings and modern archaeological research.