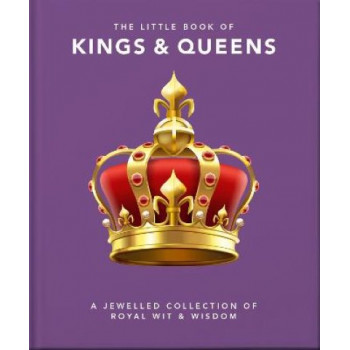 Little Book of Kings & Queen, A : Jewelled Collection of Royal Wit & Wisdom, A

Kings and Queens are monarchs and are still present in many countries around the world, thousands of years after the first rulers took over, and despite many of them holding no power. Most of the world has no monarchy, some of it a figurehead only, and even fewer an actual active head of state, but stories of Kings and Queens are often in the news as people are fascinated by rulers of their own and other countries. Amazing stories surround Kings and Queens throughout history, and The Little Guide to Kings and Queens is right royally resplendent with fascinating and fun facts, amusing and amazing anecdotes, witty and wise quotes, and plenty of lists. It adds up to a regal reserve of recreation for your mind. SAMPLE QUOTE: 'I declare before you all that my whole life, whether it be long or short, shall be devoted to your service and the service of our great imperial family to which we all belong.' - Queen Elizabeth II (as Princess Elizabeth), 1947. SAMPLE FACT: The longest reigning monarch was King Louis XIV of France, who held the throne for more than 72 years.