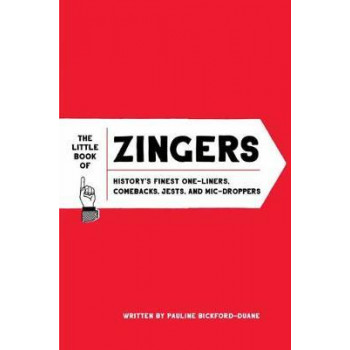 You know Mark Twain, creator of the long-beloved characters Huck Finn and Tom Sawyer, but have you heard what he said about Jane Austen? The Little Book of Zingers will feature the greatest comebacks and one-liners of all time, uttered by the iconic men and women we know and love (or love to hate)! Every generation sees its fair share of geniuses: men and women who possess boundless intellect and are capable of incredible insight. Soren Kierkegaard was such a man. Widely considered the father of existential philosophy, Kierkegaard uttered such profundities as: "If I am capable of grasping God objectively, I do not believe, but precisely because I cannot do this I must believe." But on one truly momentous occasion, Kierkegaard made one confident and succinct statement that shook the earth: "My opponent is a glob of snot." Kierkegaard spoke of Hans Martensen, an academic with whom he'd had a fair share of disagreements. The two often went toe-to-toe in scholarly debate, but with this dynamite zinger, Kierkegaard ended all further discussion. After all, who expects to be called a glob of snot? There's no coming back from that. The Little Book of Zingers will explore the rich depths of crushingly hilarious salt-in-the-wound one-liners you've never heard that'll make you gasp at their audacity. From the Age of Enlightenment to the Roaring Twenties to the boogie-down seventies, The Little Book of Zingers will take readers on a journey through some of history's greatest burns, spoken by the men and women who shaped the world.