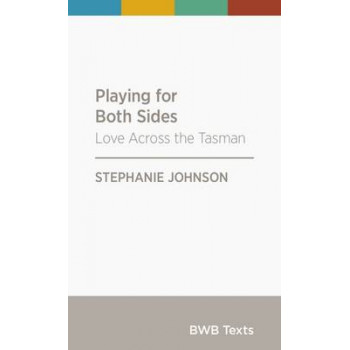 BWB Text: Playing for Both Sides: Love Across the Tasman BWB

For novelist Stephanie Johnson, her relationship with Australia and Australians has been an ambivalent one. She has lived there for periods in her life, and her first book, a collection of short stories, was actually published in Australia. She was described then as a young Australian writer, something she says she agreed to 'for reasons that are complex and some of them hardly honourable'.For Johnson the longing to return has waxed and waned. 'Why don't I live there?' she often asks herself. Yet she is a sixth-generation New Zealander.In this BWB Text Johnson explores her elusive and ambivalent feelings about the sunburnt country - which includes a musician's road trip there with her singer-songwriter son Skyscraper Stan - and in so doing casts fascinating light on some of the formative influences that have shaped the work of this awardwinning New Zealand writer.