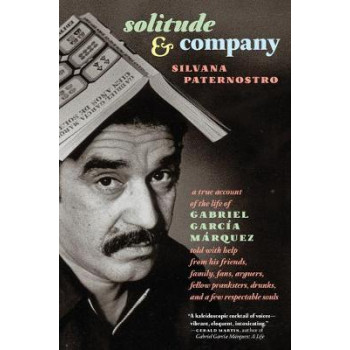 Solitude & Company: A True Account of the Life of Gabriel Garcia Marquez

Prize-winning journalist SILVANA PATERNOSTRO grew up in Barranquilla, Colombia, home to Garcia Marquez's fabled literary group, La Cueva. In 1999, she was selected by Time/CNN as one of "Fifty Latin American Leaders for the Millennium," and is the author of In the Land of God and Man, nominated for the PEN/Martha Albrand Award, and My Colombian War. A frequent contributor to English and Spanish publications including the New York Times, the Paris Review, the New York Review of Books, Vogue, and El Malpensante and Gatopardo, she lives between New York City and Colombia. Translator EDITH GROSSMAN is one of the most renowned Spanish-to-English translators of our time. In addition to translating seven of Gabriel Garcia Marquez's novels, including Love in the Time of Cholera and Memories of My Melancholy Whores, she has translated works by Miguel de Cervantes, Mario Vargas Llosa, and Ariel Dorfman, to name a few. A member of the American Academy of Arts and Sciences, she is the recipient of a Guggenheim Fellowship, a PEN Ralph Manheim Medal, an Independent Foreign Fiction Prize, and many other awards and honors. She teaches at Columbia University in New York Cit