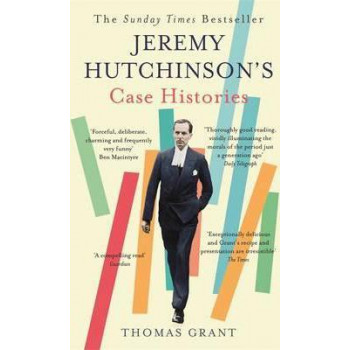 THE SUNDAY TIMES BESTSELLER SHORTLISTED FOR THE CWA NON-FICTION DAGGER 'Thomas Grant has brought together Hutchinson's greatest legal hits, producing a fascinating episodic cultural history of post-war Britain that chronicles the end of deference and secrecy, and the advent of a more permissive society . . . Grant brings out the essence of each case, and Hutchinson's role, with clarity and wit' Ben Macintyre, The Times 'An excellent book . . . Grant recounts these trials in limpid prose which clarifies obscurities. A delicious flavouring of cool irony, which is so much more effective than hot indignation, covers his treatment of the small mindedness and cheapness behind some prosecutions' Richard Davenport-Hines, Guardian Born in 1915 into the fringes of the Bloomsbury Group, Jeremy Hutchinson went on to become the greatest criminal barrister of the 1960s, '70s and '80s. The cases of that period changed society for ever and Hutchinson's role in them was second to none. In Case Histories, Jeremy Hutchinson's most remarkable trials are examined, each one providing a fascinating look into Britain's post-war social, political and cultural history. Accessibly and entertainingly written, Case Histories provides a definitive account of Jeremy Hutchinson's life and work. From the sex and spying scandals which contributed to Harold Macmillan's resignation in 1963 and the subsequent fall of the Conservative government, to the fight against literary censorship through his defence of Lady Chatterley's Lover and Fanny Hill, Hutchinson was involved in many of the great trials of the period. He defended George Blake, Christine Keeler, Great Train robber Charlie Wilson, Kempton Bunton (the only man successfully to 'steal' a picture from the National Gallery), art 'faker' Tom Keating, and Howard Marks who, in a sensational defence, was acquitted of charges relating to the largest importation of cannabis in British history. He also prevented the suppression of Bernardo Bertolucci's notorious film Last Tango in Paris and did battle with Mary Whitehouse when she prosecuted the director of the play Romans in Britain. Above all else, Jeremy Hutchinson's career, both at the bar and later as a member of the House of Lords, has been one devoted to the preservation of individual liberty and to resisting the incursions of an overbearing state. Case Histories provides entertaining, vivid and revealing insights into what was really going on in those celebrated courtroom dramas that defined an age, as well as painting a picture of a remarkable life. To listen to Jeremy Hutchinson being interviewed by Helena Kennedy on BBC Radio