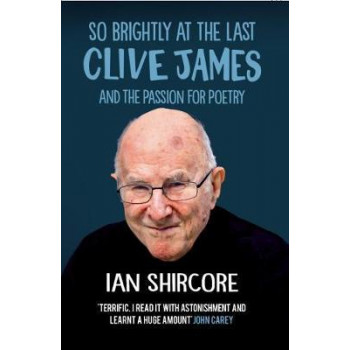 So Brightly at the Last: Clive James and the Passion for Poetry

In this offbeat and affectionate poetic biography, Jimi Hendrix, Princess Diana and Syria's Asma Al-Assad rub shoulders with Auden, Eliot and Shelley, and with the Trouser Thief Clive met during ten long weeks locked up in a closed psychiatric ward. Since 2010, when he was told he had three separate life-threatening conditions, Clive has poured out a stream of fine poems, sometimes light, witty and paradoxical, sometimes sad, heartfelt and regretful. Some, like Japanese Maple, an instant Internet sensation, have already made it into the anthologies. Others, like his book-length epic, The River in the Sky, are more demanding. All are packed with the unexpected ideas, inventive imagery and breathtaking wordplay that have helped him achieve his avowed ambition of becoming 'a fairly major minor poet'. AUTHOR: Ian Shircore is a sought-after ghostwriter and author of a dozen books in his own right, including Loose Canon: The Extraordinary Songs of Clive James and Pete Atkin, which featured an enthusiastic six-page foreword by Stephen Fry. Ian has also written about JFK (John F Kennedy: The Life, The Presidency, The Assassination), conspiracies (Conspiracy! 49 Reasons to Doubt, 50 Reasons to Believe) and the much-missed author of The Hitchhiker s Guide to the Galaxy (Douglas Adams: The First and Lost Tapes).