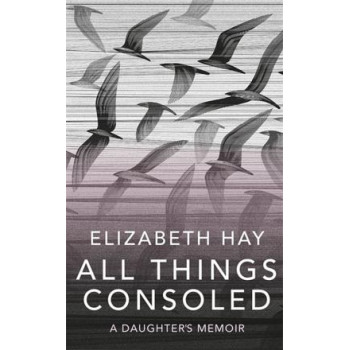 Winner of the 2018 Hilary Weston Writers' Trust Award for Non-fiction A poignant, complex and hugely resonant memoir about the shift from being a daughter to a guardian and caregiver, by a prizewinning author. From Elizabeth Hay, one of Canada's most celebrated novelists, comes a startling and beautiful memoir about the drama of her parents' end, and the longer drama of being their daughter. Jean and Gordon Hay were a formidable pair. She was an artist and superlatively frugal; he was a proud and principled schoolteacher with an explosive temper. Elizabeth, the so-called difficult child, always suspected she would end up caring for them in their final years, in part to atone for her childhood sins. Philip Roth once said, "Old age is a massacre". ALL THINGS CONSOLED takes you inside the massacre as Hay's ferociously independent parents become increasingly dependent on her. With remarkable wit and honesty, Hay lays bare the agony of a family coping as old age turns into the tragedy of living too long. In the end she arrives at a more nuanced understanding of her mother and father, and of herself as their daughter. They were and remain the two vivid giants in her life.